The Future of Internet Health & AI: Thoughts From The Community

In November, we put out an open call to the Mozilla Festival community for essays to include in the future-scoping final chapter of the MozFest book’s second edition.

But the current global health pandemic requires us to ask the question: how will COVID-19, which is certain to have a long-lasting, global impact, affect the future of the internet and AI?

How Will COVID-19 Affect The Future of The Internet and AI?

It’s a big question, and the answer will only become known with time.

Amidst the current public health crisis, we’re being reminded of just how central the internet is in our lives.

Mozilla and the MozFest community are helping to build an internet that is inclusive, safe, decentralised, and available to all. Namely, a healthy internet - which also means trustworthy AI.

What does that mean in this unprecedented time? There’s reason to be worried about the growing spectre of data surveillance and control - but we see hope for the future too. As Mark Surman wrote in his blog Privacy Norms and the Pandemic:

“A few weeks ago, I was worried that this was where we were headed: increased government and tech company surveillance as the new norm. The rallying of the privacy and data governance communities has me cautiously hopeful that we could go in the opposite direction. There may be a chance to use this moment to set new and better norms for privacy.”

In an effort to seize the moment and chart a healthy and trustworthy course forward, Mozilla has recently hosted several conversations on contact tracing, immunity passports, content moderation, and more.

Last fall, we asked the MozFest community about the future of the internet and AI via an essay search for the final chapter of the MozFest book. Although the call for these essays was sounded before the virus’s global impact, their stories remain resilient.

We are thrilled to announce the five authors and essay titles that will be featured in the next edition of the book:

Below you’ll find a sneak peek of each of their essays. To read the full essays in the book, stay tuned for the digital and print release of the second edition of “How To MozFest: An Open Book For the Internet Health Movement”.

“Do you trust AI to decide on your rights?” by Vanja Skoric

Yesterday, the authorities banned another protest announced by the group Rouge One. This is the second time that announced protest has been banned due to “fairly accurate prediction of violence during the protest” by AuRii – a new government algorithm for predictive analytics. AuRii has been analysing tweets about the announced protest in the last 24 hours and its verdict seems clear – there is 86% chance of violent clashes. Activists are appalled by its decision, calling for investigation into how AuRii makes such predictions. In addition, it seems that bots and fake accounts posted most violence-related tweets, pointing to an organized sabotage. Despite public outcry, authorities claim they can’t disclose the analytical works of AuRii.

If you haven’t heard of AuRii, don’t worry – this news is fictional. However, its premise is becoming increasingly likely, as more algorithmic systems enter into public decision-making.

There are many examples of African companies, universities, and individuals developing AI-based tools and products. The concept of democratization through AI may, however, be premature or unrealistic in the context of African countries. Successful development of AI-based products generally requires large datasets, and Africa has been called a “data desert.” Biodiversity on the continent is high, but genetic databases cataloging such biodiversity are few. Climate change will affect Africa at least as much as other continents, but few countries have dedicated satellites for collecting weather data. It is therefore in the disparity of available data where the divide between implementations of AI in Africa and those of other regions will be most greatly observed.

“Can the digital future be our home?” by Anisha Fernando

Our lives in the 21st century are tightly intertwined with the internet and the myriad of data services, processes and technologies that call the internet its home. We give birth to our digital selves from our very first interactions - an online search, an email perhaps. Yet we encounter the difficulties of seeing our data selves, our digital identities in action. It’s almost like we need a wayfinding map back to the homes our data selves live on the internet.

“I know my role, what about you?” by Uffa Modey

Since the introduction of internet technology in Nigeria in the late 90’s, the country has become more web literate and dependent on the web for day to day activities. This is very good for our development. However, a significant percentage of the country’s population still remains unaware of the core values of the network. They approach the technology as just consumers with little or no contributions towards developing or advocating for principles that uphold a healthy online ecosystem.

I was a part of this percentage until 2018, when I came across the internet health community through the Mozilla Open Leaders program.

In ten years, the medium of the internet may be experienced as a contact lens or something even more intimately cyborg. With so much unknown, we posit a healthy future in terms of its collective substance—its cultural content—that is equitably, ethically, and sustainably formed and reframed.

When we look at the internet today, we see a syndrome. A hegemony built on algorithms that amplify, instead of remedy, the limits of our knowledge. We must hold tight to the agency and potential of our sacred non-artificial intelligence. We need to heal ourselves, with the help of the internet.

Sign up for the Mozilla Festival newsletter and follow us on Twitter to be among the first to know when the digital and print second edition of the MozFest book is released. 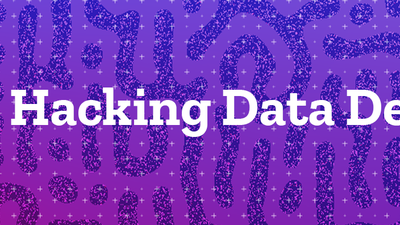